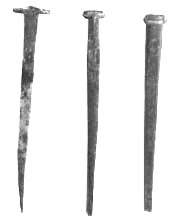 Common eight penny nails used in house and furniture construction. The one on the left was hand wrought and hand headed either by a professional nailer or by a blacksmith in the 1700s. Most antique dealers and collectors can easily recognize this style nail (the Rose Head). The nail in the middle was made between 1790 and 1835. The shank of this nail has opposite side cutting burrs because the stock this nail was cut from was rotated 1808 between each cut. The nail is severely side pinched under the head. This deformation was caused by the heading machine clamp pinching the shaft at this point to hold it securely so that the head could be formed. The nail on the right was made between 1835 and 1885. The cutting burrs are on the same side of the nail shaft. Same side burrs are evidence of an improvement in nail technology implemented in 1835. The entire nail was cut in one operation. It was no longer necessary to rotate the stock between each cut. The heading machine grabbed this style nail by the face to hold it so that the head could be formed. Notice there is no side pinching underneath the head. 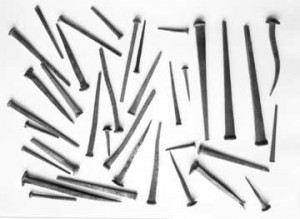 These nails represent American nail technology from the early 1700s until 1900. These nails look different because they are different. Each type was made by a slightly different process using new technology as it advanced.The ability to identify nails and the period in which they where made makes it possible to date accurately the construction period of anything fastened together with nails. This process works for a chest of drawers, a cupboard, or for a house.

System for Dating Country and Primitive Furniture, Part One

How to Buy Good Stuff

One thought on “System for Dating Country and Primitive Furniture, Part Two”