The hinge above (broken) is made of cast iron and measures 1/8 inch thick. This hinge dates to about 1820. The hinge in the middle is thinner and was removed from a cupboard made about 1860. This hinge measures 1/16 inch in thickness. The hinge on the right is a modern hinge. It was removed from a house when the kitchen cabinets were undated. The hinge dates to 1940. It is 1/32 inch in thickness and made out of stamped steel.Stamped steel hinges began to appear in 1885.I began collecting up and down, pit, bolt, and early circular saws to study saw construction and the marks each type of saw left on the wood it cut. The four saws on the left are waterwheel powered up and down saws. They leave a down cutting mark between 3/8 and 5/8 inch wide and one up drag mark 1/32 inch wide as the blade is pulled up. The circular saw was used to cut clapboards before 1880. The blade is thick, spins slowly, and makes a wide (3/8 inch) cut. Modern circular saws spin fast and cut very little wood on each revolution. The next three saws are bolt saws used by some mills to square both ends of a log before cutting boards. The three saws on the right are two-man powered pit saws used to handsaw logs into boards. The tall pit saw was used in a shipyard as a large jigsaw to shape timber for ship construction. For the purpose of scale and size, my garage is eight feet – six inches tall. 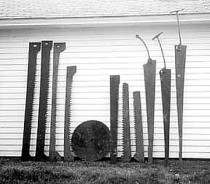 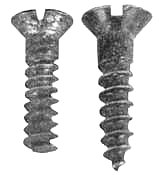 Hand Saws: A Primitive Tool on the Cutting Edge

Embellished for the Elements

3 thoughts on “System for Dating Country and Primitive Furniture, Part One”