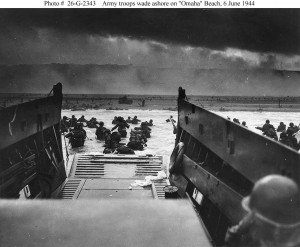 The D-Day Museum in New Orleans was not affected much by Hurricane Katrina, as it was located downtown, in relatively higher ground than many other parts of the city. But in the storm’s aftermath, the museum sustained about $300,000 in damage, mainly related to theft and vandalism at the gift store and coffee shop. But everything has been restored pretty much to pre-Katrina condition and the museum reopened, albeit with a smaller staff (26, vs. 62 before) and pared-back hours.
The D-Day Museum was founded by the late historian and author Stephen Ambrose. It opened on June 6, 2000, the 56th anniversary of the Allied invasion of Normandy (shown). Since then, about 1.5 million visitors have come to the $33 million facility, built with government grants and private donations. It is the nation’s first museum dedicated entirely to World War II, with interactive video and audio exhibits that complement the artifacts, war planes and military vehicles on display.
[amazon_carousel widget_type=”SearchAndAdd” width=”550″ height=”200″ title=”More on D-Day:” market_place=”US” shuffle_products=”False” show_border=”False” keywords=”D-Day” browse_node=”” search_index=”Books” /]