Ken’s Korner: Find just may be the oldest known church – The Journal of Antiques and Collectibles – February 2006 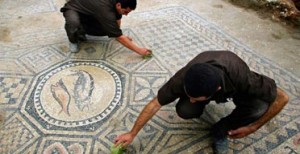 Archaeologists working at a site inside a maximum-security prison in Israel have unearthed what may be the oldest church ever discovered. The church dates from the middle of the third century to the early fourth century. The ruins include a tile floor with inscriptions in ancient Greek containing a reference to “The God Jesus Christ.” The site is close to the hill of Armageddon, where the Book of Revelation says God will defeat Satan in a fiery battle. Scholars called the find significant.

Away in a Manger