News & Views From the World of Antiques & Collectibles
By Ken Hall
The chessboard believed to be the one that King Charles I took with him to his own execution in 1649 has been sold at auction for $877,825, through Sotheby’s in London. The board is dated 1607 and was originally given to either Charles (who would have been only seven at the time) or his older brother, Henry Frederick, the King of Wales. It was made of amber, by Georg Schreiber, an amber worker in Koeningsburg, the capital of Prussia. He was known as the ‘King of the Gameboards’ and used amber that washed up on shore. 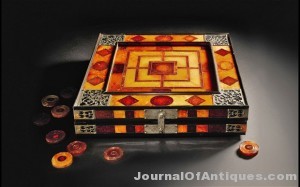 King Charles I was engrossed in a chess match when a messenger gave him the news that he had been betrayed by the Scots to the Parliamentarians during the English Civil War. It was news that led to his being beheaded, were he brought an amber chessboard and a Bible. The Bible and chessboard were passed on to his personal chaplain, Bishop William Juxon. The chessboard remained in that family until the 18th century. It was then acquired by British peer Sir Robert Hesketh, whose will trust consigned it for sale to Sotheby’s.