Ken’s Korner: Number of rhinoceroses in Mozambique is zero

News & Views From the World of Antiques & Collectibles
By Ken Hall
It’s official: There are no rhinoceroses left in Mozambique, Africa. They’ve been hunted down and wiped out by poachers, anxious to claim the horns for their alleged healing properties (although none of these have ever been medically proven). And here’s the sad part: the carnage was apparently done with the full knowledge and cooperation of game wardens whose job it was to protect the creatures. Instead, they were paid to look the other way while poachers had a field day. It is illegal to bring rhino horns into the U.S. 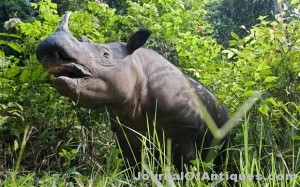 The last 15 rhinoceroses were shot dead in the Mozambican part of Great Limpopo Transfrontier Park, which also crosses into South Africa and Zimbabwe. The deaths prompted South Africa (where killing a rhino can bring a stricter punishment than killing a person) to call for fences between the two countries’ reserves. In Mozambique, poachers usually escape with a fine, if they are prosecuted at all. Typically, after killing their prey, the poachers move the horns out of the country into Asia, where they are prized.