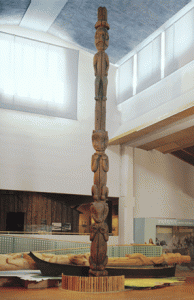 The Museum of Ethnography in Stockholm, Sweden, has returned a 134-year-old totem pole to Canada 80 years after it was taken from the Haisla Native Indians. In the 1920s, the Swedish consul to Canada, Olof Hansson, took the artifact under mysterious circumstances. In March, the 30’ pole was lifted onto a truck outside the museum as tribal members chanted and beat drums. The pole originally paid honor to the forest spirit Tsoda for saving the tribe from a smallpox outbreak.