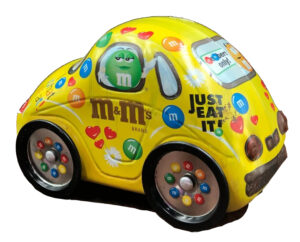 There are many fun things you can collect, but branded items are often among the most interesting. Some brands are fun to collect simply because of the influence they have had on popular culture and their longevity. One great example is M&M’s candies, which today are produced by Mars Incorporated. Let’s take a peek at the history of M&M’s, both as unusually branded candies and as a source of fun and whimsical collectibles.

The Origins of the M&M’s Name

Today, Mars is known for producing M&M’s. However, the earliest M&M’s were produced by two big names in candy. The first was Forrest Mars. He was the son of the founder of Mars, Frank C. Mars. Frank sent Forrest overseas to study business before taking over the company. That momentous decision led Forrest to eventually co-create M&M’s candies with a man named Bruce Murrie.

Bruce Murrie already had a family history of chocolate production when he joined forces with Forrest Mars to create M&M’s in 1941. His father, William, was the president of Hershey’s chocolates at the time. Together, Forrest and Bruce founded a new company. It was called Mars and Murrie. That is where the abbreviation “M&M’s” originated.

The Origins of M&M’s Candies Themselves

When Forrest Mars’ father sent him overseas, it was during a wartime period. Forrest soon noticed that the soldiers were eating British candies called Smarties. The candies were amazingly resilient. They didn’t melt in the field because they had hard coatings.

Forrest resolved to bring that candy-making technology back to the United States. Soon after returning, he had the good fortune to meet Bruce Murrie. Thankfully, Mr. Murrie was able to provide the right kind of chocolate to go along with Mr. Mars’ idea, and M&M’s were born.

An Increase and Decrease in Popularity

M&M’s were initially sold only to the military. However, soldiers returning from war were so fond of them that word quickly spread. Eventually, that caused a boom in M&M’s sales to the general public.

Upon gaining independent control, Mr. Mars made some changes. For example, he altered the formula, eliminating the use of Hershey’s brand chocolate. However, he kept other things the same. For instance, he continued to provide M&M’s for military and government use, in addition to public consumption. Even modern-day military rations often include M&M’s as snacks. They have also gone into orbit, most notably in the 1980s on the space shuttle Columbia.

In the early days, Mars did not market its M&M’s in the same way it does today. Today, it is common to see character stuffed toys, glassware, alarm clocks, dispensers, clothing, and many other collectible M&M’s products. However, in the early days, the candies were simply marketed with their name stamped on each M&M. It was an unusual move, especially at that time.

Candy wrappers featured candy names, but the candies themselves were not usually marketed. M&M’s was the exception. That unique practice, combined with military endorsement and word of mouth quickly increased sales.

1954 saw the M&M’s branding take another turn. That was when “melts in your mouth, not in your hands” was first released as the slogan for the candies. That slogan quickly stuck and is still a part of popular culture today. However, by the 1990s the Mars company needed to revitalize the brand yet again. That was when M&M’s collectibles were popularized.

If you want to collect M&M’s character items, you need to understand the characters. Today, there are six. However, when they were created in 1954, there were only two. When color came into play, there were four: Red, Yellow, Blue, and Green. Brown and Orange were created a bit later.

Each character had their own illustrated characteristics, personalities, and physical quirks. As different M&M’s were added to the product line (Pretzel, Peanut Butter, Dark Chocolate, etc.), the character team would grow or, on occasion, shrink when one of the flavors proved unpopular and was eliminated. And, as the illustrations changed with the times, small adjustments would be made. For example, Green originally wore go-go boots. Since then, she has sometimes worn sneakers or heels.

If you want to collect M&M’s items, you can buy any that tickle your fancy. However, you might prefer to focus on a particular character or marketing period. If so, you need to acquaint yourself with some of the major brand changes that have taken place since the characters were first added to M&M’s advertising practices in 1954. M&M’s characters were changed, introduced, and reintroduced many times since then. One notable example is Orange, which was originally the spokesman for crispy M&M’s. The Orange character was first released in 1999 and re-released in 2015. Meanwhile, the milk chocolate Ms. Brown character was not introduced until 2012. Therefore, if you find an M&M’s collectible featuring her, you can automatically date it to 2012 onward. Depictions of the characters were also changed, including footwear. Most recently, all M&M’s characters were redesigned again in 2022. While some changes appear to be minimal at best, to the collector this opens up another generation of M&M’s to be discovered and, of course, collected.

Turning Antique and Collectible In the New Year 1919-2019