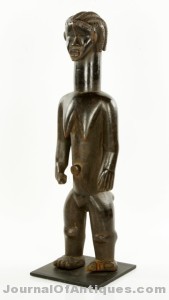 A carved wooden Bassa figure from Liberia, previously thought to be a Nkishi power figure, sold for $90,000 at a sale of African Art & Artifacts held May 10 by Kaminski Auctions in Beverly, Mass. Bassa figures are classified as ancestral figures, the use of which is unknown even to scholars on the subject. According to the tribal arts collector who purchased the item, the figure appears to be just the second example ever seen by the general public. It will now undergo carbon-14 dating to confirm its age. The price includes a 17 percent buyer’s premium.