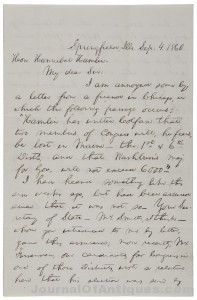 A letter written by Abraham Lincoln to his first Vice President and U.S. Senator Hannibal Hamlin of Maine, emphasizing the importance of winning Maine in the 1860 presidential election, sold for $70,550 at an American History Auction held Dec. 7 by Cowan’s Auctions in Cincinnati, Ohio. Also, a 43-star Naval flag with diamond-shaped star configuration brought $23,500; a set of prop shaft oilers used on Wright Flyers soared to $9,400; and a James A. Garfield family gold quartz match safe hit $18,800. Prices include a 17.5 percent buyer’s premium.