Guess What Article for January 2005 The Journal of Antiques & Collectibles
By Bob Cahn, “The Primitive Man” 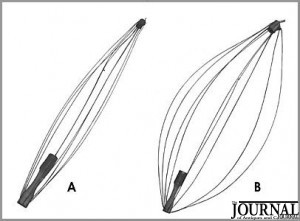 As faintly as you may associate our monthly visits with current events and topicality – we missed the boat with the recent election, so we’re trying to make up for it with this month’s inauguration.
If you paid careful attention to the previous statement, a vague clue is hovering there, even though we’re going back to the 1850’s. Our generosity brimmeth over – and you know how rare that is.
Focus is now directed to the “Objet-du-Monde” (Object of the Month): a 2-position wire frame or cage – elongated when closed, puffed out or ballooned when open – with a wood handle, topped with a small tin cup-like cap. Concentration on this pertinent feature, we will give you an integral clue to solving this month’s stumper. Paying attention to the size reference can’t hurt: twenty-three inches long; handle 4 1/2 inches.
One of the following is the right answer:

That’s our list of suspects. Did you find the culprit? Til next time!*
*Many thanx to Hank Ford of Drummer Boy Antiques, Bedford, N.H. for his courtesy and indulgence.

Last month we featured 3-year-old Montana Carson (in a 2003 Christmas card pose) flailing away with a rare graduated set of French poking irons; when heated, used to re-enforce pleated ruffles such as the Elizabethan collar worn by our diminutive model.
Only her super collector grandpa, Buck Carson would indulge her in this fashion. Incidentally, she’s still waiting for her modeling fee, Buck.
Pay up!* Thanx to Buck Carson, Newton, N.J.