Guess What Article for November 2005 The Journal of Antiques & Collectibles
By Bob Cahn, “The Primitive Man” 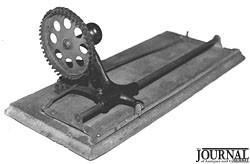 Not necessarily in order of importance, but some of man’s greatest achievements were fire, the wheel, electricity, the paper clip, the button hole and pizza. And now we have the wheel re-invented in this month’s “GUESS WHAT.”
First glance suggests an imprinter for alphabet soup pasta – based on the rubber letter characters attached to the wheel, and the flexible pressure spring action. But how many times do we have to warn against “first glance” conclusion jumping, which is being voted on for the 2008 Olympics.
This was a tedious and laborious attempt at communication advancement; due for much future refinement. But for now, let’s focus on this circa 1895 candidate.
Here are some possibilities, with the answer included among the impostors. Is it:

Pick one; answer next month. Till then!

When the farmer made “service” calls to neighboring farms with his prize bull (an important source of income, the stud fee) it was often difficult to get the animal calm enough to load on the wagon. This metal device (with leather harness) the “bull blinder” did the trick.
(Bucolic Note: In order for cows to produce milk, they have to constantly be in a calf bearing condition).*
*available for acquisition