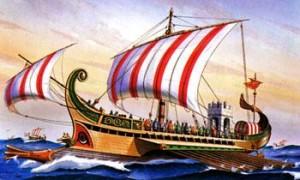 Two ancient Roman vessels dating to the third century have been found almost a mile deep off the coast of a small Greek island, an intriguing find because it challenges an accepted theory that ships from that time tended to hug coastal routes rather than risk the open sea. Also, wrecks found in deep water are almost always more intact than those found in shallow water, so they contain far more archaeological and historical information than other sites. The ships were found during a survey for a Greek-Italian gas pipeline.

Exploring Antique Technologies: Shaped in Steel – Dissecting the Technology Behind your Edged Weapons