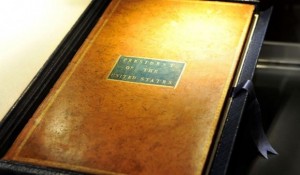 George Washington’s personal copies of the U.S. Constitution and Bill of Rights, housed in a book saying President of the United States on the cover and made just for the president in his first year of office, sold at Christie’s for $9.8 million. It was a new record for an American book or historical document. The old record was $3.4 million, paid in 2009 for an autographed copy of Abraham Lincoln’s 1864 election victory speech. The Washington book was purchased by the Mount Vernon Ladies’ Association of the Union.