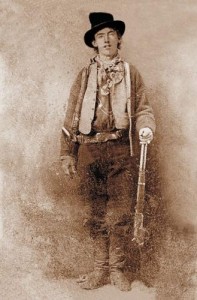 Vandals tipped over and vandalized the tombstone of legendary outlaw Billy the Kid in New Mexico, and stole three antique rifles and a shotgun from the old Fort Sumner Museum in De Baca County before fleeing. No arrests have been made and a $1,000 reward has been posted for information leading to an arrest. The tombstone weighs over 2,000 pounds. The vandals also did damage to other graves in the cemetery, so it was unclear whether they were specifically targeting Billy the Kid’s tombstone or just on a vandalism spree.
Billy the Kid was born William H. McCarty, Jr., in 1859. He was a pivotal figure in a violent Irish-English land war in New Mexico and in the process became a famous outlaw who, according to legend, killed 21 people. He was born in New York City but moved to New Mexico with his mother in search of a better life. He was beloved by Mexican-American ranchers who felt discriminated against by white bankers and land barons. Billy the Kid was shot and killed by Sheriff Pat Garrett in Fort Sumner, N.M. He was 21 years old.

On the Road to… New Mexico