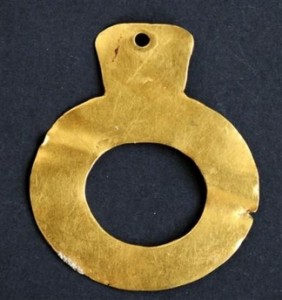 If you were out hiking and stumbled upon a prehistoric gold pendant, would you keep it, sell it or turn it in to authorities? A hiker in northern Greece chose the last of these options, archaeologists report. The finder was a woman who requested anonymity. The flat, ring-shaped pendant, estimated at 65,000 years old, probably had religious significance and would have been worn on a necklace by a prominent member of society. Only three such gold rings have been found during organized digs.
The pendant measured about 1-1/2” x 1-1/2” and was picked up near the town of Ptolemaida, about 90 miles southwest of Thessaloniki, in northern Greece. It was presented at a three-day archaeological conference held in February in Thessaloniki. Similar finds have been unearthed in modern Turkey and the Balkans (especially Bulgaria). No word on the value of the pendant. In 1997, Greek police confiscated a hoard of 33 similar pieces of hammered gold jewelry from smugglers.