News & Views From the World of Antiques & Collectibles
By Ken Hall
The planned sale of pieces of barbed wire dug up at the site of a Nazi camp in Holland has been called off because of outrage from Jewish groups opposing it. The Kamp Amersfoort Foundation had planned to sell 50 pieces of wire, each one mounted to a display board, for 10 euros (abou $13) apiece, to cover the cost of an exhibition of artifacts discovered at the site. The purpose of the exhibition was to “draw attention to the importance of physical evidence whose preservation costs money,” a foundation spokesman said. 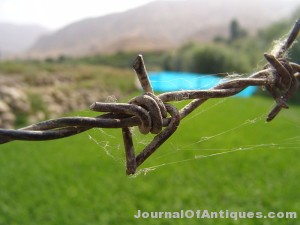 But Jewish groups immediately pounced, with one spokesperson saying, “Barbed wire is the archetypal symbol of the concentration camp. It should not be put up for sale at all. Imagine if some of these pieces were ultimately bought by a neo-Nazi. That would be horrible.” The foundation agreed and quickly backed off. It said it will give away the barbed wire pieces to those who ask for them and had relatives who passed through Kamp Amersfoort during World War II, many of whom were deported to Nazi death camps.

Celebrating the Holidays with Judaica

The Life, Legacy, and Furniture of George Nakashima