Ken’s Korner
New and Views from the World of Antiquing and Collecting
by Ken Hall
A note that floated down to the street on the morning of the World Trade Center attacks on Sept. 11, 2001 has finally found its way to the victim’s family. The note, with the scrawled words “84th floor west office 12 people trapped” on it, was written by Randy Scott, who worked for Euro Brokers. His wife, Denise, and family assumed he died instantly because he was so close to the point of impact when 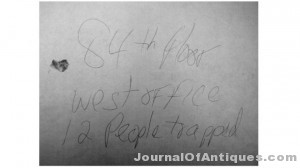 Flight 175 struck the tower. But DNA tests performed on blood on the note proved conclusively it was written by Scott.
After the note was dropped to the street, it was found by someone who turned it over to a guard at the Federal Reserve Bank. But when the guard went to radio his find, the tower collapsed and chaos ensued. The Federal Reserve branch held the note for some time before turning it over to the National September 11 Memorial and Museum, which worked with the New York City Medical Examiner’s Office to trace its origin. Denise Scott was notified of the find only last August. The note will now go on display at the museum.

On the Road to… Massachusetts