News & Views From the World of Antiques & Collectibles
By Ken Hall
John Dodds, assistant general counsel for the Air Force and an amateur military historian, was browsing with his daughter at a Goodwill store in Washington, D.C., when they came upon a weathered old leather bomber jacket that caught their eye. On the back was a figure of a man with a red beard in a winged helmet, with the words “Red Raiders” and “22nd Bomber Group” emblazoned on it.  There was also a name tag on the front breast, reading “Robert G. Arand.” Dodds paid the $17 price and brought the jacket home. 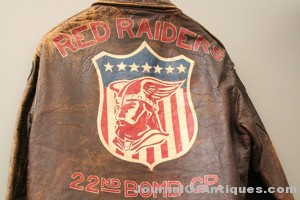 Within 24 hours, he was on the phone with Mr. Arnaud, now 90 and living in Cincinnati. Dodds had done a bit of quick research to track down Arnaud, who flew more than 40 missions in the South Pacific and remained in the military until his retirement in 1983. He told Dodds he thought his wife may have donated the bomber jacket to charity in 1950, but he was thrilled when Dodds said he’d ship it back to him. And the Red Raiders? Arnaud said the nickname was inspired by a former commander, Col. Richard Robinson.