By Ulysses Grant Dietz, Chief Curator and Curator of Decorative Arts, the Newark Museum
City of Silver and Gold from Tiffany to Cartier is currently on view at the Newark Museum, and will be in the decorative arts galleries through the end of 2015. 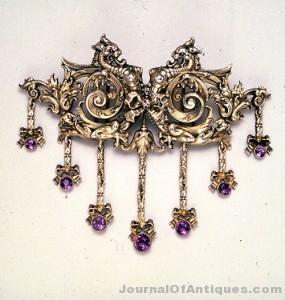 Only one city in America could have produced this exhibition Newark, New Jersey.
And after you’ve stopped snorting with disbelief, I’ll explain.
From the 1850s to the 1950s (as well as before and after those dates), Newark, New Jersey was the center of the American gold and silver industry. I don’t just mean the making of gold and silver products (although 90% of the solid gold jewelry in America came out of Newark), I also mean the platinum refining and sweeps-refining industry; and the jewelry-making machinery industry. Newark was a powerhouse. It was the Detroit of jewelry.
Most of what Newark made, however, was aimed at a middle-class market, and thus has escaped the interest and attention of museums across America. Not so at my museum, where I have collected across the spectrum of Newark silver and gold production for over 30 years.
The major silver producers in Newark are represented in both the high and low end of the sterling market. At the popular end, there were William B. Kerr Company and Unger Brothers, who produced millions of pieces in hundreds of different designs. Newark-made art nouveau and beaux-arts style silver jewelry was retailed in every jewelry store in every town and state in the USA. Because silver jewelry was modest in cost, Newark-made sterling brooches and belt clasps and chain-mail purses offered among the most adventurous designs produced anywhere. When you’re only risking $5 on a large silver belt pin, you don’t mind being a little daring in your style choice. 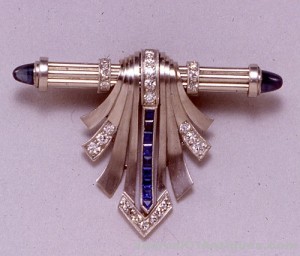 At the upper end, Tiffany & Co. had operated a factory in Newark since 1877: moving all of its sterling and electro-plate production to a new brick castle of a factory in Newark in 1894. The only jewelry made in Tiffany’s Newark plant was silver jewelry—seen as part of its vast output of sterling tablewares and luxury objects. Among the rarest and most interesting of Tiffany’s jewelry, its sterling jewelry output in the 1930s was intended to parallel Georg Jensen’s highly successful line of hand-made sterling jewelry. But Tiffany silver jewelry never really caught on, because its clientele was, quite literally, used to the finer things. Like gold. Hence, Tiffany silver jewelry is rare, although not usually very expensive when it surfaces.
On the gold side of the equation, Newark was an even greater powerhouse. With scores of shops and factories, ranging from a half a dozen benchworkers to enormous factories with 500 or more employees, Newark’s gold industry pumped millions of 14 and 18-karat objects into the middle-class marketplace every year. From simple one-piece collar buttons (invented by Krementz & Co. in the 1860s) to opulent Egyptian style gold mesh purses, decorated with enamel and turquoise (Sloan & Co., ca. 1895), Newark was the most famous name that nobody in America knew. Retailers always sold their products with their name on the box, and thus Newark’s reputation remained a trade secret until the industry itself began to fail in the 1950s, worn out by offshore competition and the market erosion caused by the Depression after 1929.
By the 1890s, Newark manufacturers began to add small discreet touchmarks to their gold jewelry, in order to signal retail buyers that they had a specific maker’s reputation to rely on. Sometimes that little mark made it onto pieces also marked by a famous retail name: Tiffany & Co., Cartier, Bailey Banks and Biddle. These surviving double-marked jewels serve as valuable documents of the ubiquity of Newark jewelry in America’s finest stores. 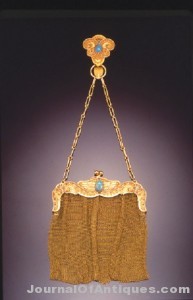 The Newark Museum has the only comprehensive holdings in Newark-made gold and silver jewelry in the country, alongside its extensive holdings in American silver and international gold jewelry.
Edward Lewand, GG, ASA, AAA. Private Independent Appraiser, Consultant Appraisal Service, LLC. New York and Georgia  in coordination with Ulysses Grant Dietz, Chief Curator and Curator of Decorative Arts, the Newark Museum. Feel free to contact Ed at ealcas@msn.com or for more information regarding the article contact the author at udietz@newarkmuseum.org