Comic Character Collectibles
By J.C. Vaughn
As Washington, D.C.’s Awesome Con has continued to develop into a major pop culture convention, the staff and Geppi’s Entertainment Museum (GEM) thought it would make a great test case for a traveling exhibit from the museum’s collection. So over the June 3-5, 2016 weekend at the Walter E. Washington Convention Center, GEM presented its first major roadshow of comics, art, and collectibles usually housed within its walls.
“It couldn’t have gone better. I know we increased the recognition of the museum for sure,” GEM President Melissa Bowersox said.
“It’s been phenomenal. We’ve been so happy that people not only have been coming and seeing the exhibit, but then coming back a second, third, and fourth time to look at some of these things. Overall, we can’t be more thrilled with the response that we’ve been getting from the great fans here at Awesome Con,” Collections and Exhibits Manager Michael Solof said.
Convention attendees walked through the exhibit mesmerized by highly coveted comic books, notable collectibles, and fun tidbits of pop culture. Comics including The Amazing Spider-Man #1, Tales of Suspense #39 with the first appearance of Iron Man, Journey Into Mystery #83 with the first appearance of Thor, Amazing Fantasy #15 with the first appearance of Spider-Man, Fantastic Four #1 with the first appearance of the team, and other comic highlights were on display.
They had collectibles featuring the Pink Power Ranger, Bart Simpson, Negan from “The Walking Dead,” Freddy Krueger from “A Nightmare on Elm Street,” the Stay Puft Marshmallow Man, and the original “Plane Crazy” storyboards of Mickey Mouse.
While “Steamboat Willie” is better known, “Plane Crazy” was actually the first Mickey Mouse cartoon Walt Disney produced. The storyboards were the guidelines for the animation, so it’s easy to understand their selling point.
“Everyone was stopped in their tracks by the displays. Reactions ranged from gasps and awes to actual tears of joy. The original “Plane Crazy” storyboards were incredibly well received. We were thanked by everyone for bringing the exhibit to DC and many guests returned to tour multiple times, in most cases bringing back friends to see it – just as happens with our actual museum location,” Bowersox said.
GEM plans further traveling exhibits.
In Memoriam: Chet Krause
Chet Krause, a lifelong resident of Iola, Wisconsin and perhaps the town’s best-known citizen, passed away at age 92 on June 25, 2016, of complications of congestive heart failure. At the time of his death he was under hospice care at Iola Living Assistance where he had been admitted June 22.
It’s hard to imagine that any of us who write or read about collectibles haven’t been influenced by his life’s work, though many haven’t heard of the man himself.
In October, 1952, Chet published the first issue of Numismatic News. The paper was meant to fill a niche he had identified to serve coin collectors nationwide who were far removed from metropolitan areas. He was the prototypical customer for his new venture: a serious coin collector who was geographically cut off from that hobby’s mainstream.
For the next five years the publication grew in advertising volume and circulation as Chet nurtured it on evenings, weekends and when inclement weather kept him away from current construction projects. In 1957, Chet finished the last building he would ever construct, a 40′ x 40′ brick and glass office a block off of Iola’s Main Street. That would remain, with occasional additions as expansion dictated, the offices of Krause Publications for nearly two decades as Numismatic News and Krause Publications expanded through acquisitions and start-ups of periodicals to fill identified needs in the coin collecting community.
When the coin collecting hobby suffered a serious downturn in the mid- 1960s, almost forcing the demise of his publishing business, Chet recognized that diversification was key to insure its survival. In 1971 he founded Old Cars, and began to develop a parallel line of periodicals for antique auto enthusiasts. 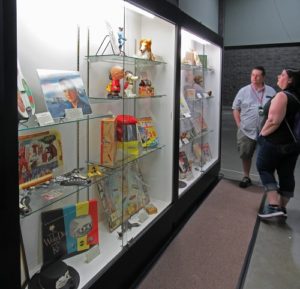 “While many comics collectors and professionals may not know the name of Chet Krause, they certainly knew the magazines, newspapers and books his company, Krause Publications, published. Longtime comics collectors know about Comics Buyer’s Guide, CBG Price Guide and Comics Retailer (which I was lucky enough to be founding publisher of). Krause also published periodicals over the years for coins, baseball card and sports collectors, record collectors, toys, postcards, and many other areas,” said Greg Loescher, former Publisher of Krause’s Comics and Records Division (1990-1997) and former Editor of Goldmine magazine (1997-2004).
“As a boss, he hired local workers whenever he could, importing specialists only when he couldn’t find them closer to the tiny rural town that was his home. His motto for us was ‘On time, all the time,’ and he told us with pride when he hired Don and me in 1982 that Krause Publications had only mailed one publication late in the three decades before that. The printing plant had burned down after KP had sent the negatives, so KP reshot the issue and sent it to another printer, missing the goal by only a single day,” Maggie Thompson, longtime editor of Krause’s Comics Buyer’s Guide, said.
“Folks in the area also thrilled to one of his other hobby pursuits, collecting many of the military vehicles from his World War II unit. A tour of Chet’s tanks was a regular stop on the Comics Buyer’s Guide picnic. There are old car and military vehicle shows near the publishing company’s grounds to this day; the Iola Old Car Show, every July, attracts more than 100,000 annually,” said novelist and comics historian John Jackson Miller, who credits Krause with his start at CBG.
“Importantly, he arranged to sell the company to its employees, giving them all a stake in its future. The employees later sold the company as it faced internet headwinds; he was unhappy following that, wanting to take his name back. I remember suggesting at the time it might be worth renaming the town after him as he had played such a role in so many lives,” Miller said.
In addition to his business ventures, Krause was known in the community for his quiet and often secret philanthropy for those in need.
J.C. Vaughn is Vice-President of Publishing for Gemstone Publishing. Amanda Sheriff and Carrie Wood contributed to this piece.