Match Safes and Little People
A Conversation with Dr. Howard Knohl of The Knohl Collection
by Judy Gonyeau, Managing Editor
It is said that Museums showcase only 5% of their collection at any given time; however private collectors Dr. Howard and Linda Knohl are able to keep their over-80,000 items across 17 collections on view in their private residence, with few exceptions. How did this “ordinary guy” and his family manage to accumulate what has turned into 17 collective categories? 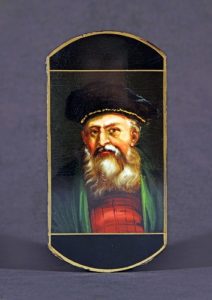 The Knohls found love at first sight in 1960 when Howard was studying at New York Medical College and Linda was an undergraduate at Brooklyn College. They married and lived quite frugally in a one-room apartment for six years until Howard was drafted to serve in Vietnam, moving with his wife and two children to a base in El Paso, Texas. Upon his return home, the Knohls moved to Southern California to begin a new life, and joyfully added two more children to their family. Howard established himself as a leading radiologist and Linda worked as an interior designer, along with working on other ventures in order to support their family.
Upon getting out of the real estate business in the mid-1980s, Howard was gifted a rare first-edition book with captivating illustrations, text, and typography. This gift ignited a passion for collecting that today results in four libraries in their private residence housing over 4,000 English language first-editions printed before the year 1700-the largest privately held collection of its kind in the world, and a great source of pride for the Knohls. But their craving for collecting also branched out and focused on fine art paintings from the 14th through the 19th centuries, then ornate clocks from Europe and the U.S., ivory and bronze statues, gilded cobalt demitasse sets, extremely rare 19th century cheroot (a small mechanically rolled type of cigar) cases-the first of three collections related to smoking, yads (Torah pointers) from every continent, large-format sheet music, walking sticks from around the world. And then, in the mid-1990s, a collecting direction that caught on like wildfire: match safes (smoking collectible #2) and a collection of what are considered the rarest of match safes, little people (#3).
To date the Knohls have acquired over 22,000 match safes, and over 130 little people match safes. 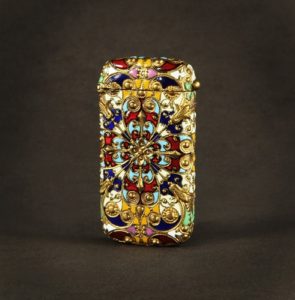 Match Safes for Safety
The history of the match safes goes hand in hand with the rise of smoking tobacco in all its forms-pipes, cigars, and cigarettes-between 1850 and 1915 – all ignited using small wooden friction. The problem? Flammability. Pocket match safes, called pocket vesta’s in England, were designed to safely hold early friction matches, which were known to ignite unexpectedly when carried loosely in the pocket or purse. “Match safes were invented to literally make your matches safe,” said Howard Knohl. “They were everywhere and used by everyone during that time. Since the match safe cut across every segment of society, from nobility on down to the ordinary workingman, it is no surprise that these convenient cases ranged from the fabulous and elegant to the absurdly cheap and vulgar.”
Manufacturers on every continent made them in countless shapes, sizes, and styles. They were sold everywhere; from cheap souvenir stalls and inexpensive novelty stores to highly sophisticated jewelry shops. Many of the early match safes were made out of tin and held a celluloid panel displaying an advertisement, a political endorsement, or an image of a famous tourist attraction. According to theknohlcollection.com, match safes could be found in the shape of animals, insects, boats, beer bottles, and body parts. Some match safes were treated like little canvases – tiny sporting scenes, beautiful rural landscapes, and remarkable nautical images – all hand-painted with fine enamel.
The match safe was also created to be portable and easily hidden in a pocket on a vest or jacket. “A woman would keep them on a chatelaine worn around her neck and neatly hidden in her décolletage for those private moments when she could enjoy a smoke of tobacco beyond the eye of the general public. A man would keep them in a vest or jacket pocket.”
Fanning the Flame of Collecting
“When I first began collecting match safes, I was fascinated with the idea that things like celluloid and tin and other hard surfaces were being used as canvases by artists,” said Howard. The Knohls had begun a collection of cheroot holders that were often hand-painted with images of women, nautical images, or battle scenes. These holders were made out of paper mache or even cardboard.
“So much of the art of the 19th century was centered around the impact smoking had on their lifestyle. Ninety percent of men and women smoked. The world centered on smoking for trade and a strong economy. And these beautiful and practical holders made it safe.”
One area of art that seemed to “forget” about match safes being used during that time period was film. “Cowboys in spaghetti westerns and characters in films set during that time-unless it was a film striving to be historically accurate-did not show anyone using match safes, but the real cowboys and people throughout the frontier, including those involved in the Gold Rush, would have had them and used them. Every great manufacturer during that time would have made some and many would be customized as a sign of elegance, wealth, and status.” Howard feels this may be due in part to the generation gap that happened as match safes disappeared from public view as lighters and matchbooks made their mark. The match safe and the smoking customs began to die out and were losing their use to the next generation, and seemingly lost to the one after that.”


The Little People Match Safe Mystery
There is one area of match safe collecting that is just about a complete mystery: little people. At first glance, they bear a striking resemblance to “Tobys,” i.e. those colorful characters memorialized in porcelain jugs and the like that started in England, but they are not English. Nor German, or Japanese, or Italian or Chinese. They are mostly found in the United States.
Little people match safes are an extremely rare item to find. These delightful character match safes are each one of a kind as they were hand painted to reflect a certain style of character. There are also animal shapes and those featuring more than one character. Complete ones feature a metal hat that opens and closes to keep the matches inside and a striker pad on the bottom.
While some collectors feel they are from Germany, Howard’s gut feeling is they are American and possibly from the Pennsylvania Dutch area. “None have come from Germany – 98% of these characters come from the U.S. They have no marking on them to identify where they are from. No real research has been done on them. There are no records of these little people being made or sold anywhere.” And, while there were a couple of articles from the 1920s saying they were all made in the U.S., that is only a theory.
The questions go on: They are made from 1830 to 1870 out of hard paste porcelain, not soft – another indicator that they are not European. Their size and shape are unlike other match safes. They are typically about 3 inches tall, and they did not fit neatly in a vest pocket or pant pocket. Were they kept on the tabletop? At smoking establishments? Designed for a man or woman?
There appears to be only about 1,000 in existence, and The Knohl Collection has over 130 (the second largest little people match safe collection in the world). And while there are between 90-100 different characters, there are many details from one to the next that make them look identical but then there may be a slight difference in the height, or the line of the bottom of a skirt or trouser, or the outline of the shape of the hair that shows they are not.
Finding these treasures is also difficult. “There may be four or five that show up at auction over the course of a year, or you may find the occasional one at an antique show or flea market with a wide variety of goods, like at the show held at the Rose Bowl or Brimfield. They seem to be spread out individually rather than collected in large numbers because of their personalities; people tend to hang on to them,” said Howard. Typically they range in price from $600 to $800, with the more common ones around $450 to $500, depending upon condition and whether or not they have the cap. Howard knows where some are, but is not sharing the information, because the owners tend to have only one, and they are in love with it.
While the extensive first edition book collection owned by the Knohls may have brought them the most pride as a collection, the little people bring them the most love – often at first sight. No mystery here.
Howard and Linda Knohl’s passion for the arts extends well beyond collecting. For over fifteen years they have dedicated themselves to bringing world-class musical theater to their community and increasing the awareness of and the appreciation for all forms of art. Linda is currently the president of the Anaheim Performing Arts Center Foundation (APACF), whose mission is to build and maintain a performing arts venue in the city of Anaheim. Howard and Linda are both committed to helping broaden the art world in Orange County, California and eager to share their constantly growing art collection with a world audience.