Ken’s Korner: Mural dates Mayas to about 100 B.C. – The Journal of Antiques and Collectibles – February 2006 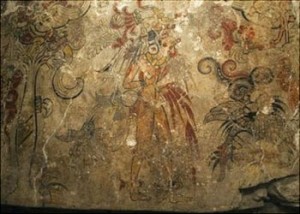 Archaeologists digging at a pyramid site called San Bartolo in Guatemala have found a mural that dates to around 100 B.C. That’s about 600 years before scholars believed the “Classic” Maya society flourished. The mural depicts the writing, kings and mythology of the Maya, relating the story of creation and the links between kings and gods. It is made of limestone plaster and painted in bright colors. The find shows that Maya society had more ancient roots that has been supposed.

The Writing Desks and Habits of Famous Authors

The Business of Buying in the UK, Part Two