News & Views From the World of Antiques & Collectibles
By Ken Hall
Ken’s Korner: Superman wall find gavels for $175,000
Remember last month we told you about the guy who found a copy of Action Comics No. 1 – the first appearance of Superman, in 1938 – stuffed inside the wall of the home he was remodeling? Well, he sold it, through online auction house ComicConnect.com, for $175,000. That sounds like a lot of money, and it is, but consider this: a copy with a grade of 9.0 sold at auction not too long ago for more than $2 million. A copy with a grade of 10 would probably fetch $3 million. The copy just sold had a grade of 1.5. 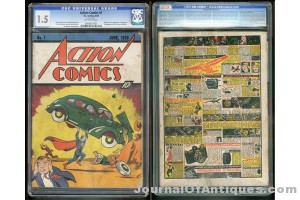 It would have been graded higher, except a family argument erupted and one of the finder’s relatives ripped the comic book from his hands, tearing the back cover. That was a $50,000 oops – maybe more – but the comic was in pretty degraded condition to begin with, having been stuffed into the wall and used as insulation for 75 years.
Of the 250,000 copies of Action Comics No. 1 originally produced, only about 100 survive. Interest in Superman has spiked even more than usual lately, thanks to the movie.