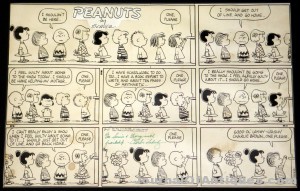 An original Peanuts Sunday comic strip, drawn by the late legendary illustrator Charles Schulz on March 1, 1964, sold for $41,400 at a multi-estate sale held June 6 by Philip Weiss Auctions in Lynbrook, New York. Also, an occupational shaving mug for a tow truck driver named “C. Wiegand” made $10,925; a first-edition hardcover copy of L. Frank Baum’s The Wonderful Wizard of Oz (circa 1899-1900) brought $3,000; and a letter written in 1957 by then-U.S. Senator John F. Kennedy, signed, made $1,980. Prices include a 15 percent buyer’s premium.