Ken’s Korner: Turns out the bra is 600 years old – The Journal of Antiques and Collectibles – September 2012 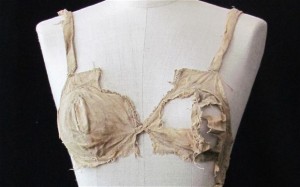 In the history of underwear, it has always been assumed that the brassiere is a little more than 100 years old, an item that was invented as Victorian-era women turned away from the tight corset. But a surprising new find by archaeologists working in an Austrian castle suggests that the bra has been around since the 15th century. Discovered were four linen bras, dating to the Middle Ages, one of which looks exactly like a modern-day bra, with distinct cups, two shoulder straps and a back strap, decorated with lace and other frills.
The bras were found among more than 2,700 textile fragments. Some were linen, others were linen combined with cotton. The discovery was actually made in 2008, but the researchers, incredulous over their own find, spent the next few years researching the bras and carbon dating them to make sure they were real. Once satisfied, they published a report in the BBC History Magazine. The first modern bra was patented in the early 19th century. It was thought to have been invented by the New York socialite Mary Phelps Jacob.

Samplers: An Evolution of Purpose & Design