For collectors of original comic art – and indeed, art of many different media – the digital age seems to have thrown a monkey wrench into the works. Even when traditional elements are part of the process, the existence of one, true original can be in doubt. To go a step further, though, when a piece is created on a screen and then output, what truly is an original? As it turns out, this is not a new query.
“The problem goes back to the beginnings of print-making. A print maker, a lithographer or silk screen artist – all would insist that their art is not complete until it is printed. And that means every copy of the print is an original,” said writer-artist Mark Wheatley, a veteran comic book creator known for his work on Mars, Tarzan, and Breathtaker, among other projects.
“But the art world prefers to think of an original as being unique. And so a compromise was worked out that the artist would sign and number and occasionally remarque the prints to make them originals. In the digital realm, things are much the same. There can be an infinite number of digital originals. A first generation digital image would be an original source. Once the image is copied and re-saved, we are into second generation images and can ignore those. But all the first generation images are originals. Doesn’t matter, really, because what most people really want is something unique,” he said. 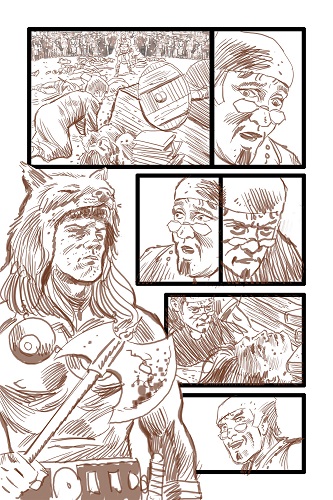 Collectors of original comic book art know that there are differences between the work done in the 1930s and work done today. For instance, in addition to a change in the physical size of the pages, there’s a major difference in how lettering is done. Most comic pages through the early 1990s were done with hand lettering or paste-up balloons. With the exception of a few practitioners, most modern lettering is done on the computer. The art itself is not touched in the process.
Additionally, many modern craftsmen know very well what their colleagues will bring to the table. An artist such as Greg Land, for example, understanding what is expected of modern colorists, provides a very minimal amount of illustration on the page compared to someone like Joe Kubert. The final result of Land’s work is often considered breathtaking, but those who look for that level of work on his penciled and inked pages may be disappointed. And of course that’s just one example.
Consider this: a pencil artist finishes a page. They scan and deliver it electronically to the inker. The inker could actually print it out, ink that printout, scan it, and send it to the colorist. The colorist could then complete their work, either on the computer screen (more likely) or on the printout (not as likely), and then send it to the letterer, who plies their craft.
So, which page in that process is “the” original? Our first inclination is to say the pencil artist’s page, but then what about the inker’s page, which is clearly a unique, creative part of the process? This is not something either artists or collectors have answered to everyone’s satisfaction yet. One thing we know is that whatever the method or process, there’s still a lot of work that goes into making a comic book page.
Brent Anderson is another veteran comic book illustrator, whose credits stretch from Pacific Comics’ Somerset Holmes and Marvel’s Ka-Zar to his current long run on Kurt Busiek’s Astro City at DC, and he knows what goes into the work. “The monthly schedule adhered to by the biggest comics publishers require the artist(s) to
produce 20 to 24 pages of printable material approximately every 30 days. Since each page averages four to five panels per page, and since each panel has anywhere from one to five or more visual elements, there are often as many as 300 separate visual elements
in the ‘average’ comic story. This is a lot of work, especially if the artist can’t just ‘make it up’ on the fly and needs to do a little research. Personally, and I’m not sure if I’m ‘average;’ it takes me at least six weeks to produce 24 finished Astro City pages, four weeks to pencil same for another artist to finish, and two weeks to lay out the basic storytelling for someone else to finish. Depending on mitigating factors a single page could take as little as a day-and-a-half or as much as a week to finish,” he said.
He said that the positive aspects of creating comic book work digitally is the freedom to undo 32 brush strokes of an unsuccessful drawing, do very quick ink fills, and to erase pages with the click of a button. It’s clean, no hand-washing, and doing detailed work is easier when one can enlarge the image to any size on the monitor. There are negatives, however.
“Not having the same tactile visceral feeling of pencil, pens, and ink on paper,” Anderson continued. “[There are] no originals at the end of the process, [there is a] reliance on a massive technological foundation to access the work and the need to back up files constantly and consistently,” he said.
With this new way of producing comic book artwork, in terms of original art, how does it change the paradigm for collectors? What do creators like Anderson or Wheatley sell to art collectors?
For his part, Wheatley said he makes his prints unique.
“Just like the traditional print makers – we sign, number and remarque the prints. Other artists have gone out of their way to have some physical piece of art, used in making the final, digital image. But I think that is a bit forced and won’t survive, except as needed in specific cases – where a physical brush stroke is absolutely what is needed to make the image work. The fact is, physical art work is going to become much rarer,” he said.
J.C. Vaughn is the Vice-President of Publishing for Gemstone Publishing. Gemstone’s Amanda Sheriff contributed to this piece.

In the Digital Age, What Is Original Art?